This month we selected a Tamaryokucha (玉緑茶) from Shimabara (島原), in the prefecture of Nagasaki (長崎県). Tamaryokucha is also called Guricha (ぐり茶) curly tea, owing to the shape of its leaves. Steep up to three times, and enjoy its soft taste, with tones of citrus, grass and berries!

This is the second time we introduce a Tamaryokucha. Tamaryokucha is mostly produced in Kyūshū (九州), especially in the prefecture of Nagasaki. Moreover, this tea represents only 2.2% of the national production of tea in Japan, so we can say that it is a precious tea, as indicated by its name “玉緑茶” (green tea of jade).

The city of Shimabara is located on the Shimabara peninsula, in the southeast of the prefecture of Nagasaki. Long time ago, teas from Shimabara -not only Tamaryokucha, but also black tea and Hōjicha- used to be famous among Kyūshū teas.

But this region had many volcanic disasters throughout history. More recently, in 1991, this area was devastated by the eruption of Fugendake (普賢岳). In this environment, tea plantations were completely doomed because of pyroclastic flows.

However, inhabitants restarted tea production from scratch over the past two decades, and managed to produced excellent teas, like this organic tea. On the other hand, there are not many tea plantations anymore.

For these reasons, we call Shimabara tea a miracle tea, or tea that rose again from its ashes like a phoenix. We use only the first green buds well exposed to the sunshine for this tea. Tea prepared like this has a freshness in the palate, and a rich taste. See also our blogpost from March 2018.

I tasted this Tamaryokucha with a Japanese sweet representing spring, named “Spring Banquet” (春の宴). It is a scene where cherry blossoms fell down from the tree float in the flow of a stream. Not only on the tree, but also in the water, cherry blossoms are everywhere. Spring has arrive soon! 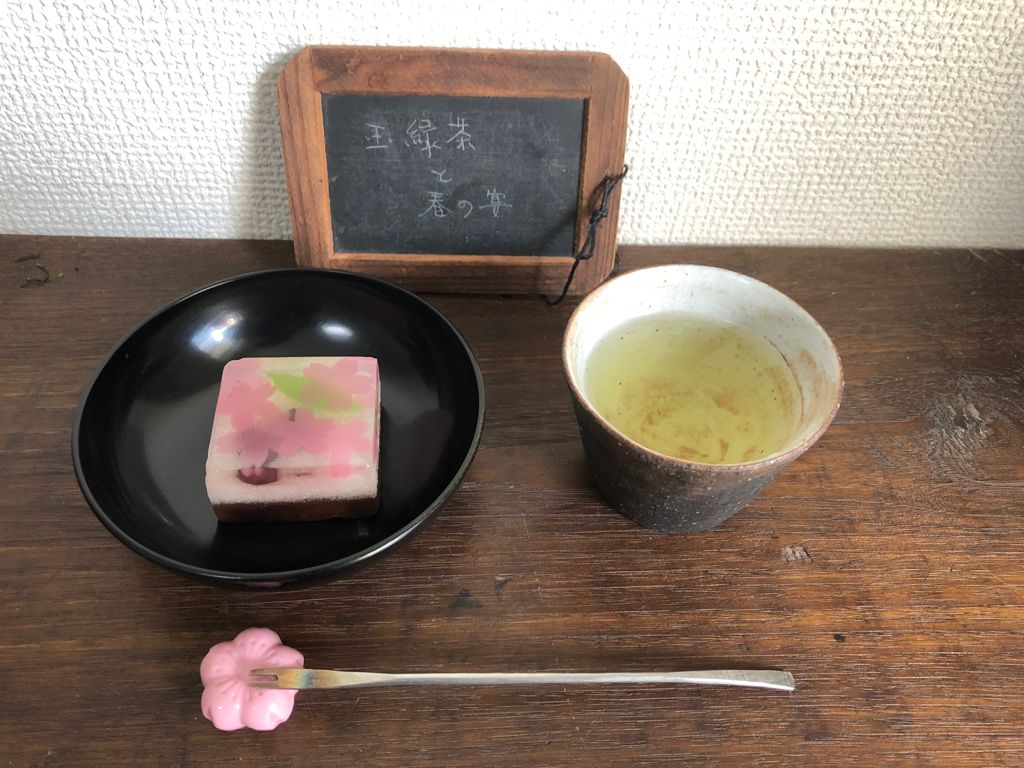 John of Arc in Japan

Once upon a time there was a 16 years old boy named Amakusa Shirō (天草四郎) in Shimabara. According to the legend, a Portuguese missionary expelled from Japan in 1613, prophetized that a Messiah of 16 years old would appear within 25 years and that heaven would be realized then.

As the boy made an entrance as predicted, making some miracles, he was chosen as the leader of the rebellion of Shimabara (1637-1638). This was the biggest rebellion ever in Japan. People rose up against the state because they were exploited, and because Christians were persecuted.

In that time, foreigners could only enter Japan from the port of Nagasaki, making it the gate of Christianity in Japan. Amakusa Shirō was also a Christian. The revolt lasted 4 months and it was repressed by the Edo government. Amakusa Shirō was decapitated and most people there were also killed.

After this rebellion, the Edo government decided to close the door for foreigners, a decision that lasted more than 200 years. Amakusa Shirō is still a charismatic character in Japan, and he is often represented in movies, mangas, animes and video games.

The amount of tealeaves should be adapted according to the desired taste: it should be around 2 teaspoons (6 grams) of Tamaryokucha for 160ml (5oz) of spring water. The infusion should last one minute in water at 70ºC (160ºF). The second infusion should be done more quickly than the first one. We can use the same leaves up to 3 times. Enjoy your Tamaryokucha!