This month we selected a Kariganecha (雁ヶ音茶) from the region of Uji (宇治), in the prefecture of Kyōto (京都). 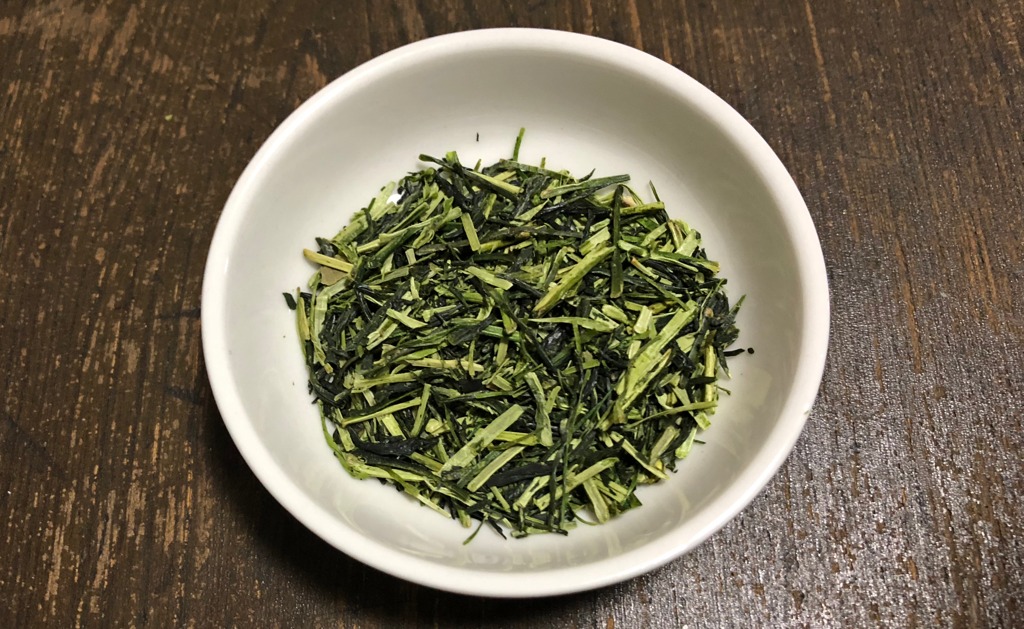 Kariganecha (雁ヶ音茶) is the name used in Kyōto to designate teas made of stalks. Outside of Kyōto stalk teas are called Kukicha (茎茶), which literally means "stalk tea". However, now the appellation Kariganecha is used more and more outside of Kyōto, as it is a much more poetic word. You can (re)read our blogpost of March 2016 to (re)discover the reason.

There is not an exact definition of Kariganecha, however, it is usually made of stalks of Gyokuro (which is the most refined green tea in Japan) or stalks of high-grade Sencha. The Kariganecha that we selected is a blend of stalks of both Gyokuro and first-class Sencha.

Stalks of green tea are said to have more than twice the theanine (Umami), one times and a half the appetizing aroma and four times for sweetness of tealeaves. At first glance Kariganecha looks like a watered down green tea because of its very pale color, but it is absolutely not true. The tea has a pronounced sweetness, an excellent freshness and an herbaceous aroma with a hint of bitterness. If you infuse it in hot water, it will have a sharp taste. But if you steep it slowly at a low temperature, it will be more sweet. 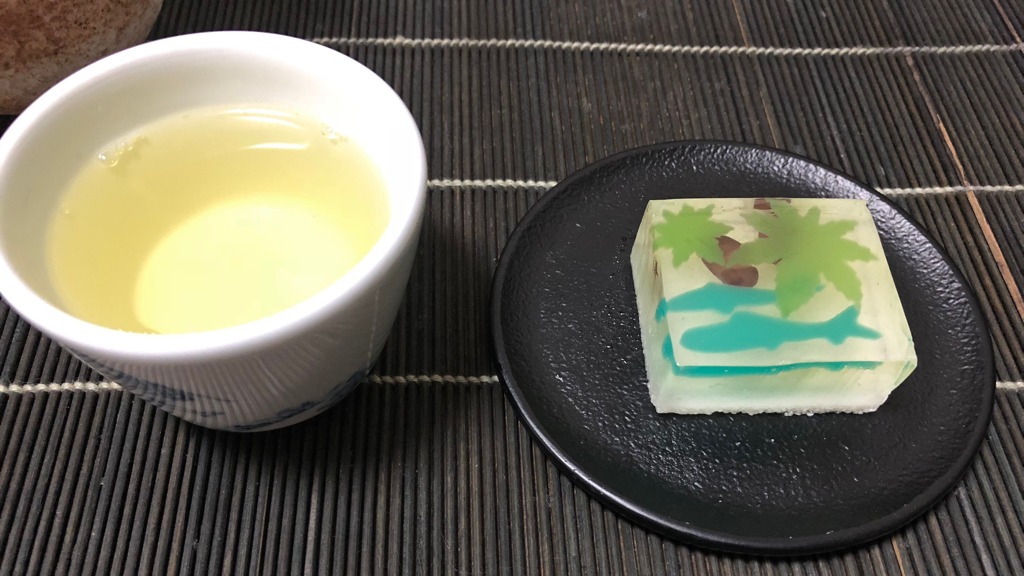 To taste this Kariganecha, I prepared a Japanese cake called Seiryu (清流) or “limpid stream”. It recalls the scene of the beginning of summer with Japanese maples and rocks, locked in Kanten (agar or agar-agar in English). This delicate cake, only midly sweetened, goes very well with Kariganecha's natural sweetness.

Kanbayashi Shunsho is a green tea shop founded in 1560 in Uji, in the prefecture of Kyōto. Their ancestor served as the person responsible for green tea under the orders of great samurais, such as Hideyoshi Toyotomi et Ieyasu Tokunaga.

The former capital of Japan, Kyōto, was founded on the bed of a former lake. The lake dried up to leave a basin surrounded by three mountains, called Yamashiro basin (or Kyōto basin). It has the shape of a flat bowl with a great void in the shape of a football beneath Kyōto city, that is filled with underground water. It is said to hold nearly the same volume of water (27.5 billion tons) as Lake Biwa, the biggest lake in Japan located north-east of Kyōto.

This is the reason why there are still a lot of wells everywhere in the city of Kyōto. People founded the capital here, in a place very rich in spring water, 1.200 years ago, and Japanese culture was cultivated. Kyōto people created the tea ceremony, invented a dyeing technique called Yuzen (友禅) and continue to make sake, sophisticated cooking including tofu (soybeans curd), and traditional cakes for which the soft spring water at a constant temperature (17ºC/63ºF) is essential. The ancient Japaneses people did not choose this location at random.

The amount of tealeaves should be adapted according to the desired taste: it should be around 2 tablespoons (8 to 10 grams) of Kariganecha for 180ml (6oz) of spring water. The infusion should last around one minute in water at 70º to 85ºC (160º to 185ºF).

For the upcoming hot season, you can also prepare cold Kariganecha. Put a sachet (15 to 20 grams) in a bottle of 1 liter of spring water and leave it in the refrigerator for more than 6 hours. Then discard the sachet and keep the bottle in the refrigerator