This month we selected a Hōjicha (焙じ茶) from Kyōto (京都). I personally often buy this tea which is my favorite. So I am very happy to introduce it this time! 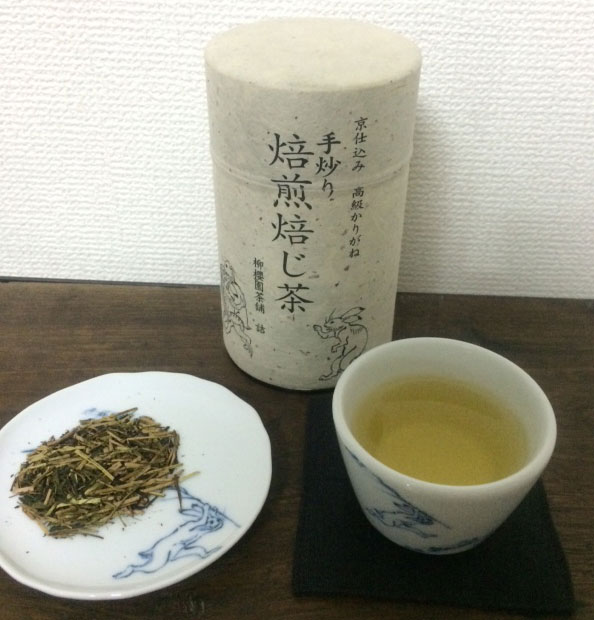 Once upon a time there were gooses in the northland. As they were migratory, they moved to the warm land during the winter, crossing the sea. When they took a rest at sea, they used a twig to perch. However, most of gooses died in the foreign land before returning to their homeland in spring, leaving twigs on the beach. The stalks of tea reminded the ancient inhabitants of Kyōto of the twigs which lost their master. They were romantic, even though there is no sea in Kyōto!

Regarding the knowhow to produce Hōjicha, please refer to the blog posts of May 2015 and November 2015.

This Hōjicha has a roasted flavor, not strong but distinct and a rich sweetness. Despite the roasting it still has an herbal scent. We say the scent of roasted tea, such as Hōjicha, has three times the healing effect of other green teas such as Sencha.

There is a temple, called Kōzan-ji (高山寺) in Kyōto. A monk named Myōe Shōnin (明恵上人) planted seeds of tea from China in the garden of this temple in the 13th century. That is the origin of tea plantations in Japan. We still have tea harvests there every year.

The first Manga, called “Chōjū-giga (鳥獣戯画)” was also born in this temple. This manga consists of 4 tomes and represents the daily life and life style of the area using animals as characters, like frogs and rabbits.

The tea producer is Ryuouen Chaho, who is famous for Hōjicha and especially Matcha which the three biggest schools of tea ceremony in Japan select. Ryuouen Chaho uses “Chōjū-giga” on the label of its Hōjicha.