Hello! We selected a Sencha (煎茶), delimited in Ashigara (足柄) from the prefecture of Kanagawa (神奈川).

Ashigaracha (足柄茶) is produced in the prefecture of Kanagawa, not far from Tokyo, more precisely in the district of Ashigara. The tea plantations spread at the base of Mount Hakone (箱根), famous for its hot springs. The hours of sunshine are short so the development of tea trees is very slow. Thanks to these circumstances, tea trees absorb a lot of nutrients from the soil and have needle-like but soft leaves.

During the season of buds, the morning dew has an important role by means of covering the tea trees. This prevents them from absorbing too many ultraviolet rays and as a consequence tea leaves have little tannin (the origin of bitterness) and a sweet scent. The soil in this region is fertile and contains a lot of nitrogen, one of the necessary elements for the tea quality.

Ashigaracha is made from a traditional method called “Asamushi (浅蒸し)”: it is shortly steamed for only 40 seconds. The tea prepared like this has a good balance between sweetness and bitterness with a golden yellow color.

The history of Ashigaracha is fairly recent. It begins in 1924, after the 1923 Great Kantō earthquake (105,385 deaths and 37,000 missing) for industrial reconstruction.  The production of Ashigaracha is organized by tea producers as one, taking the form of the cooperative association.

A classical hero for Japanese boys

His name is “Kintaro (金太郎) or “Golden Boy”, a classic hero in Japan. There is no one who does not know him in Japan. We grow up listening to his brave story, and songs sbout him.

Once upon a time, a boy named Kintaro was born in the district of Ashigara (足柄) and enjoyed playing with the animals in the Ashigara mountain, especially Sumo. He’s a good, kind and very strong boy. One day, he arrived with his animal friends at a ravine and down there was a rushing torrent. That’s the reason why no one could get across. Therefore, he cut down a big tree and made a bridge. A great samurai, Minamoto Yorimitsu (源頼光), saw the scene and asked him to accompany him to the city. He accepted his offer, became his loyal retainer, changing his name to Sakatano Kintoki (坂田金時), and enjoyed great success. Happy ending.

Kintaro is often represented as wearing only an apron marked “Kin (金)” that means gold, with an axe and riding a bear. He’s a very famous hero for Japanese boys, before “Astro Boy” or “Son Goku” from Dragon Ball! We decorate a doll of “Kintaro” on May 5th, the Children’s day. The parents want their boy to become like him: kind, but strong, and with a successful life. 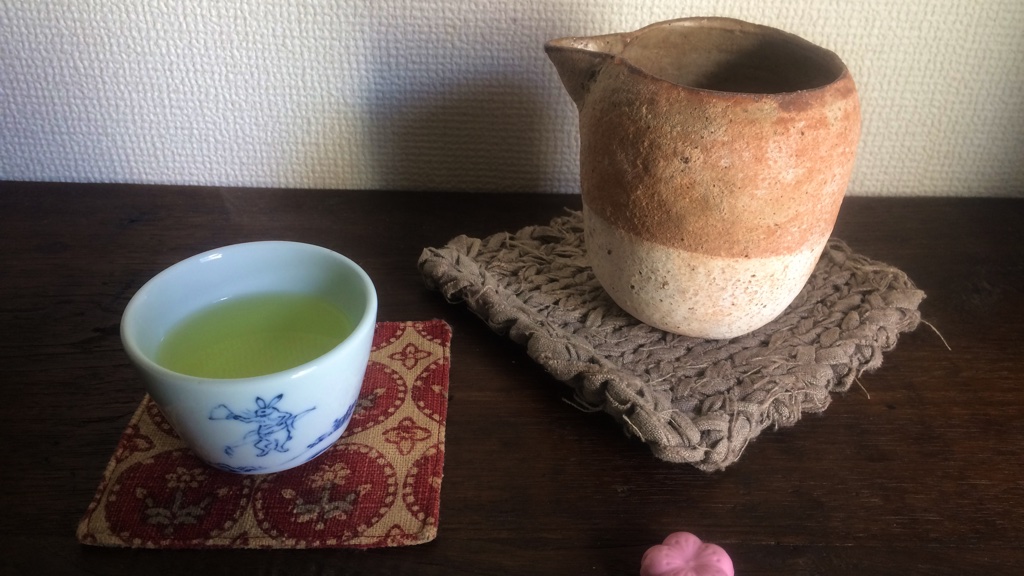 The amount of tealeaves should be adapted according to the desired taste: it should be around 2 tea spoons (10 grams) of Ashigaracha for 300ml (10oz) of spring water. The first infusion should last between 50 and 60 seconds in water at 80ºC (175ºF). The second infusion should be done more quickly at a higher temperature than the first one.