This month we selected a tea from Murakami -Murakamicha (村上茶)- in the prefecture of Niigata (新潟).

Murakamicha is one of the green teas produced the most North of Japan. Tea leaves fade under -10ºC (14ºF), however, as snow covers the plants completely during winter it protects them from extreme cold (temperature under the snow is around -3ºC (27ºF) to -4ºC (25ºF) degrees) in this region where winter is much longer and sunshine hours much shorter than in all other regions producing tea. But it makes for a tea with little tannin and more sweetness.

Normally, we produce green tea by one single tea variety, however, Murakamicha is a blend of several tea varieties, improved for the cold climate. Thus The tea prepared has a sweet and special rich flavor. Murakamicha is considered one of the luxury teas. Murakamicha has a history of 400 years: it began during Edo (in 1620). At the period of Meiji (in the 19th century), Murakamicha was exported to the United States (New York) and to Russia (Vladivostok).

The green tea we selected is classified in Sencha (煎茶). It is a blend of 4 tea varieties (Fukumidori, Yabukita, Tsuyuhikari and Asanoka). Since the quantity of Murakamicha is very small, most of it is consumed only in this region. The tea maker is Fujimien established in 1868 and this producer is also known for the production of black tea in Japan.

Murakami is one of ancient feudal cities, called “Jokamachi (城下町)” in Japan. Jokamachi means literally, “a city (町) under the castle (城の下)”. The city was protected by the clan of Murakami and prospered thanks to green tea as well as salmon.

The city has a river, “Miomote-gawa (三面川)”, known as “Salmon River” which many salmons swim up. There is also a natural scenic site “Sasagawa-nagare (笹川流れ)”, a kind of seashore shifted with the tide and a hot spring resort “Senami-onsen (瀬波温泉)” with a view facing the sea. 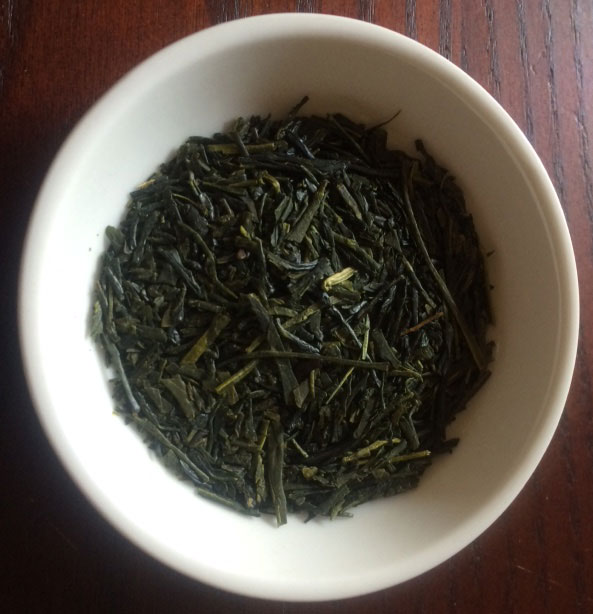 The amount of leaf should be adapted according to the desired taste: it should be around 2 tea spoons (6 grams) of Murakamicha for 120ml (4.1oz) of spring water. The first infusion should last 20 seconds in water at 80ºC (176ºF). The second infusion should be done for 10 seconds around 90ºC (194ºF). For the third infusion, proceed even more quickly at a higher temperature.

You can taste the umami flavor and the scent for the 1st infusion, astringency and richness for the 2nd infusion, and finally bitterness and briskness for the 3rd infusion in Murakamicha!