Spring is here! This month we selected a Sakuracha (桜茶), from the prefecture of Fukuoka (福岡) in Kyūshū (九州).

Sakuracha (桜茶) literally means a cherry blossom (桜) tea (茶). It’s not a green tea, but an infustion made of salted cherry blossoms.

Sakuracha became popular among people of Edo (the former name of Tōkyō) in the Edo period (1603-1868). At that time, we called it “cherry blossom hot water (桜湯)”. There are some Japanese expressions, which do not have a good meaning, based on the word “tea”. For example, “to cloud the tea (お茶を濁す)” which means to “dodge the subject”, or “make tea (茶々を入れる)” which means “to cast a chill”.

As the people of Edo believed in superstitions these expressions made them uneasy, so they'd rather avoid drinking tea during ceremonies, such as engagement or marriage. So instead of drinking tea, they drank cherry blossom hot water (now called cherry blossom tea). They believed that Sakuracha brings us good things with its appearance. We still have the same custom nowadays and we prepare Sakuracha for the ceremony of engagement or marriage.

Sakuracha has a slight scent of cherry blossom which is delicate and sweet. Sakuracha is good to fight hangover or stress. It also has a relaxing effect. We drink it, but we also put it in bath. It is said to heal skin problems. 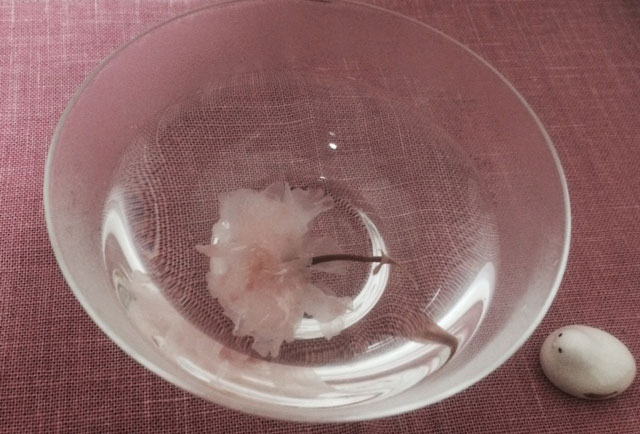 Cherry Blossom “Sakura” is -with the chrysanthemum- the floral emblem of Japan.

The other ethimology means “the seat (Kura)” of “the god of rice field (Sa)”. People believed that the god of rice field comes under a blossoming cherry tree in spring, during sowing so they dedicated offerings such as sake or food to him, namely, under the cherry blossom (the seat of the god), praying for a good harvest of rice. This is the origin of the Hanami tradition.

The producer is Seiyoen, located in the prefecture of Fukuoka, and also famous for Yamecha. 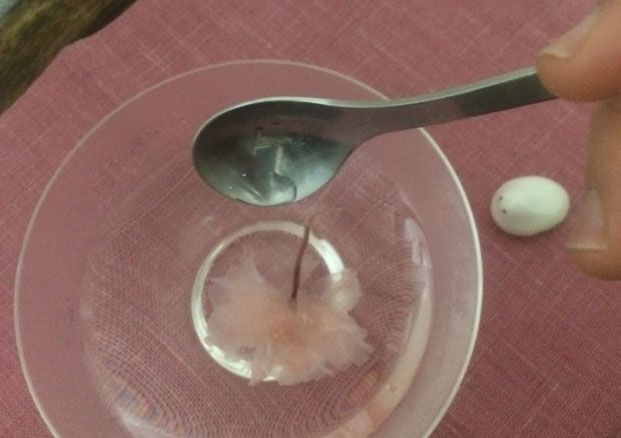 Prepare a single cherry blossom for 70-80ml (2.4-2.7oz) of spring water. Soak it in lukewarm water (50ml) to remove salt for 5 minutes. Then put the desalted cherry blossom in a cup and pour water at 90ºC (194ºF). Put a teaspoon of lukewarm water, which was used for desalting, in the cup.