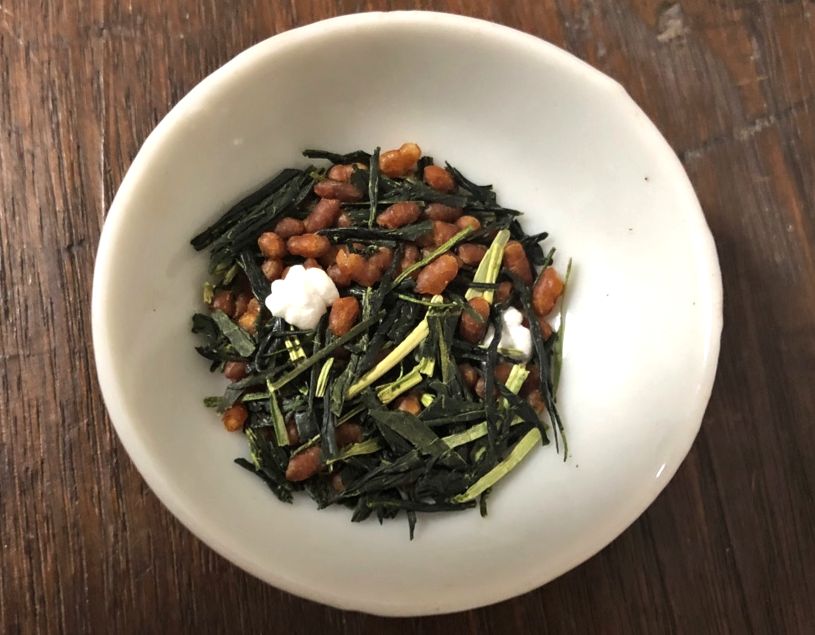 Horaicha (蓬莱茶) is the original Genmaicha (玄米茶), that is to say a Sencha (煎茶) sprinkled with roasted brown rice with a touch of popped rice. We use green tea harvested around Kyōto (京都) in the like of Uji (宇治) and Wazuka (和束), and mix in Japanese rice.

In order to keep the Horaicha consistent and of very high quality, the proportions of the various teas are slightly adjusted by the owner of the tea shop every year. At this stage, it is not yet a completed Horaicha, but still a Sencha blend.

Only after a customer orders it, Horaicha is made on the spot by blending in roasted rice. Popped rice is also added, for aesthetic reasons, as it takes the shape of a flower. Making a Horaicha with good balance requires years of experience. Horaicha has a roasted, sweet aroma and a savory flavor. 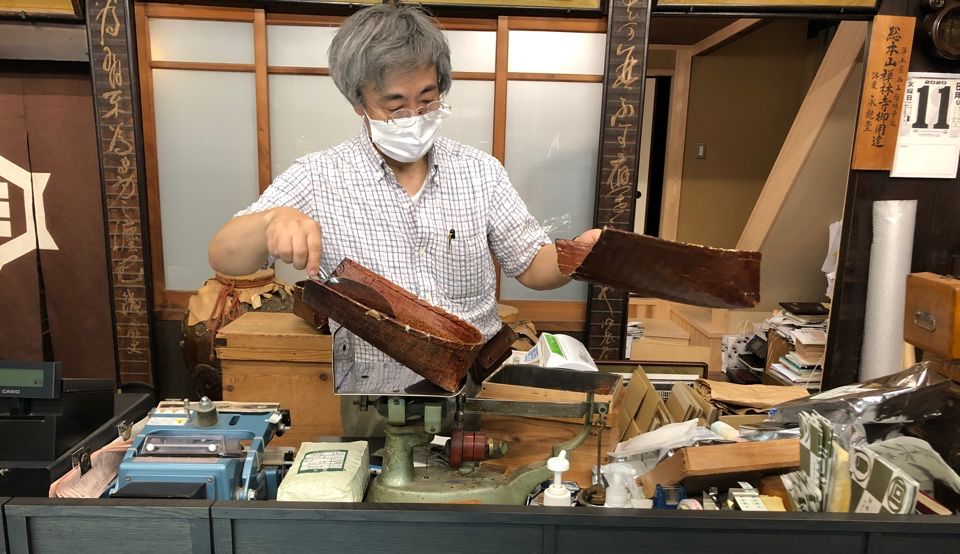 Adding roasted rice to the sencha blend at Horai-dō (蓬莱堂).

The process behind Genmaicha (玄米茶) was invented in this shop, Horai-dō (蓬莱堂), during the Taishō (1912-1926) area. So the history of this tea is not very long yet. One day an idea of this mixed tea came to the mind of the ancestor of the current owner of the shop.

In Japan, Buddhism had taken root among the people, especially among Buddhist zen monks. In that teaching, there is the concept of Itadakimasu (いただきます), “I take all that is given to me to eat”. They poured water or tea in the rice bowl after eating the rice, and drank it all, so as to not leave a single grain of sticky rice in the bowl. 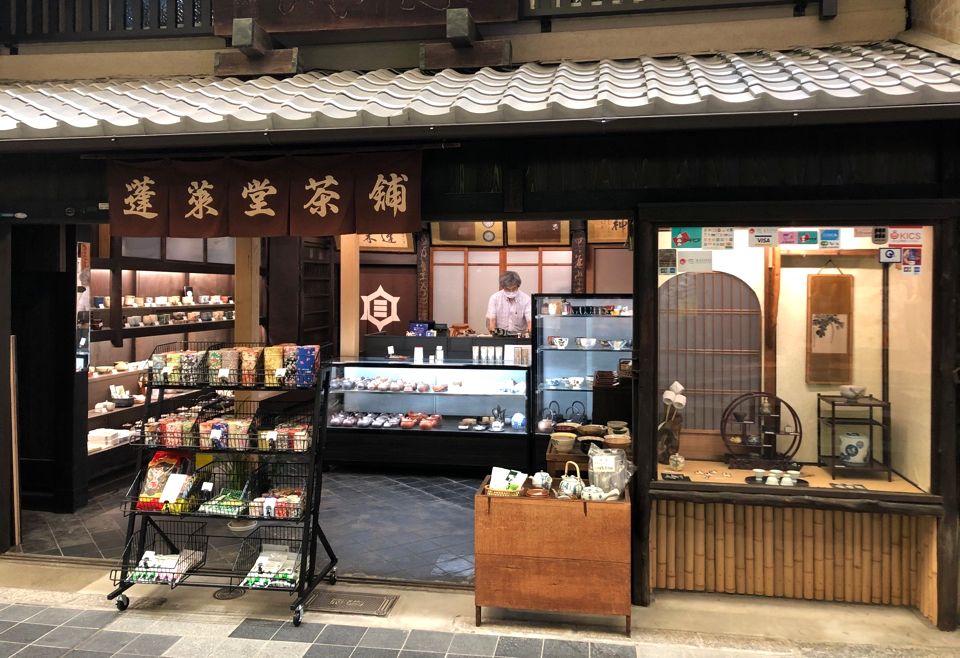 The creator of Horaicha was inspired by that process and invented Genmaicha, having a rice flavor mixed in green tea. And then, he named it Horaicha (蓬莱茶) after the name of his shop, Horai-dō (蓬莱堂). Other tea shops quickly started to prepare similar teas, under the name of Genmaicha that simply means Brown Rice tea. Horaicha is of course exclusive to the shop Horai-dō.

I tasted Horaicha with a Japanese meal, that of Buddhist monks: a bowl of rice, a cup of miso soup and an umeboshi (salted plum). Usually we drink tea after eating, but since this Horaicha doesn't bother the taste of food, we can serve it during the meal. Of course, it goes well with everything!

A giant rubber duck in Ōsaka

One morning in August, I found a giant rubber duck floating on a river of Ōsaka, nearby my apartment. Relative to his big body, his presence is quite modest and cute. He was created by a Dutch artist in 2007, inspired by yellow rubber ducks kids play while taking bath. 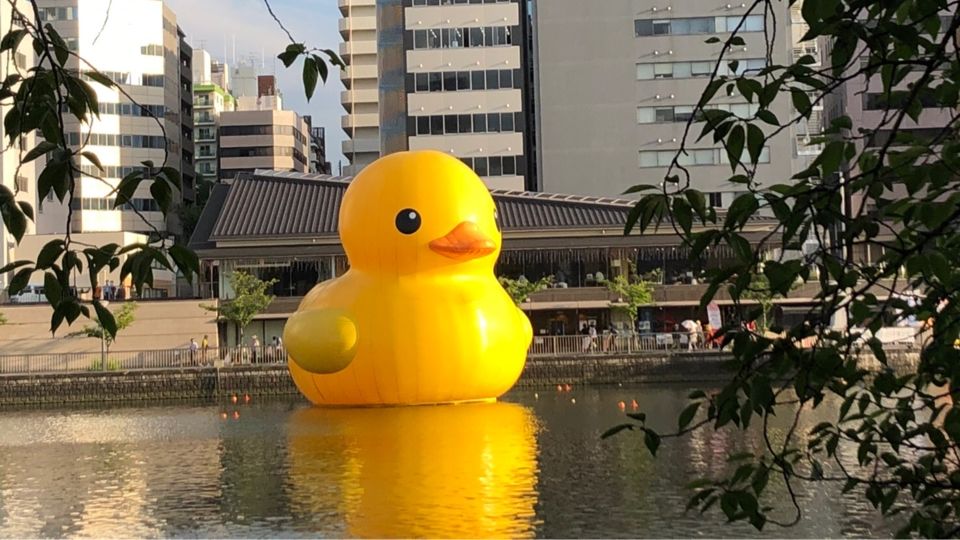 This rubber duck says that there are no boundaries between people, despite divisions in countries. It goes around the world in order to wish peace and reminds us of innocent childhoods, looking at it on the water. He says that it is a messenger of happiness. After the visit of Ōsaka, it may drop by your town. If you cross it somewhere, please say hello!

The amount of tealeaves should be adapted according to the desired taste: around 15 grams of Horaicha for 200ml (7oz) of spring water. The infusion should last 60 seconds in water at 90ºC (195ºF). For the next infusions, raise the water temperature and reduce the infusion time.

You can also cool Horaicha in the fridge after infusion. Drink it hot or cold as you like. Enjoy!