February 2018 – Kabusecha from Suizawa, in the prefecture of Mie

This month we picked a Kabusecha (かぶせ茶). This is the first green tea that we chose when starting Tomotcha just 3 years ago. We are going back to the origin to send you an excellent Japanese tea.

Kabusecha from Suizawa is produced by covering the tea plants with a black sheet 7 to 10 days before harvest. The black sheet makes a nice umami (one of the five basic tastes) and a soft tea, with a living green color. Tea prepared like this is considered as elegant, rich and of high quality.

The tea producer is Yasuda Seicha. I tasted this Kabusecha with a cake called Secchūbai (雪中梅), which means “a plum blossom in the snow”. Plum blossom is the symbol of February. In addition, we are in the middle of winter with snow. Japanese people do not taste Japanese cakes only by their taste, but also by their look, in this instance imagining the scene of a flower hidden in the snow meaning that spring is near. It is picturesque, isn’t it? 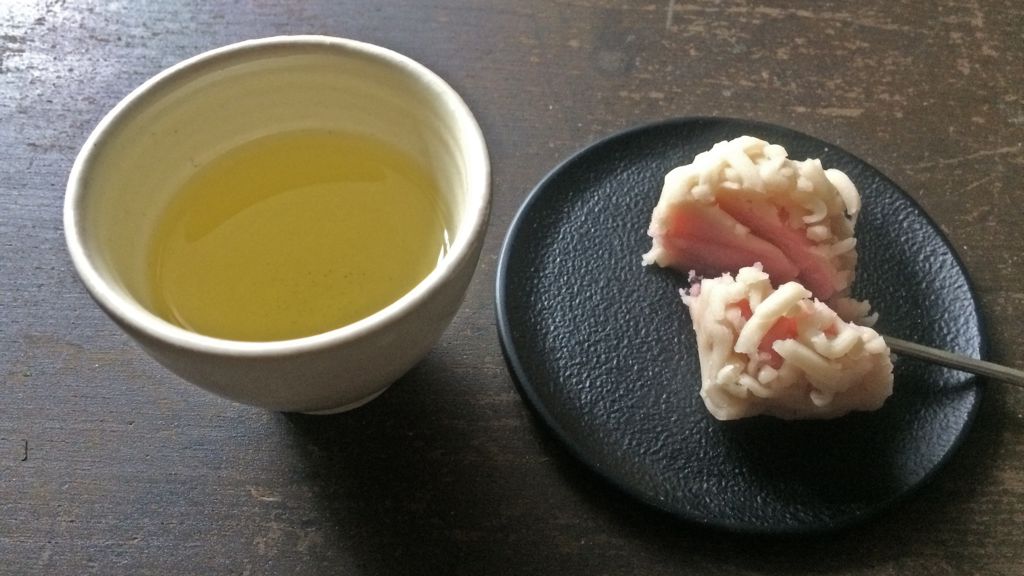 Why? Because Mie is an homonym of the Japanese word for "see".

First of all, Ise-Jingū (伊勢神宮) is the main shrine of all Shinto shrines in Japan. It is dedicated to the deity of the sun, Amaterasu Ōmikami (天照大神), but around her there are thousands of deities. Ise-Jingū is located in a forest and surrounded by ancient trees. It has a solemn silence and an inexplicable mood. The solemn ceremonies and humble but immaculate constructions are surreal. We feel like the deities are there, everywhere. With some luck, maybe we could see one?

Second of all, not far from Ise-Jingū are the conjugal rocks (夫婦岩) in Ise bay. Around the summer solstice, weather and conditions permitting, you can see Mount Fuji in between the two conjugal rocks, even though the distance is 200 km. That’s why Mie is the visible prefecture!

Personally, I travel to these places the first of January every year for the first salutation to gods and to receive the first sunshine/god halo (御来光). I share the energy of the first sunrise with you for the good start of 2018!

The amount of tealeaves should be adapted according to the desired taste: it should be around a tablespoon (6 grams) of Kabusecha for 200ml (7oz) of spring water. The first infusion should last about three minutes in water at 80ºC (175ºF). The second infusion should be done more quickly.

The tea producer also recommends to make Kabusecha with spring water at room temperature in spring. The infusion should then be longer, please adjust according to your taste.