This month we selected an Aracha (荒茶) from Uji (宇治) in the prefecture of Kyōto (京都).

Aracha (荒茶) is steamed and dried after the tea harvest of May. We do not sort leaves or stalks. We also do not fix the size of the tea. It’s literally a crude tea, or unrefined tea. The tea is carefully preserved in a cool, dark place during summer, similar to how we age wine in a cellar. It is then marketed in autumn for a limited period (from October 1st until November 30th).

The tea prepared like this has a richness and roundness in taste compared to Shincha (新茶) of May, a first flush green tea which has more freshness. We also call Aracha “Shincha of autumn”. The first shōgun Ieyasu Tokugawa (徳川家康, 1543-1616) loved this autumn green tea. In a way Aracha can be considered a tea for connoisseurs.

The green tea maker is Kanbayashi Shunsho. Their shop is located in Uji (宇治), Kyōto and was established more than 450 years ago. They recently collaborated with Coca Cola Japan to make a bottled green tea that is quite successful. We can buy this bottled green tea in vending machines or in Konbini (convenience stores usually opened 24 hours a day).

Aracha goes well with a meal. I had Aracha with a Japanese seasonal cake called “Momijigari (紅葉狩り)” which is made from rice, sugar and chestnuts. Perfect! You can imagine a scene of autumn in Japan. I will present Japanese cakes sometimes from now on with green tea. We have a lot of creative cakes according to the season, especially in Kyōto. We can taste every season in these Japanese cakes. 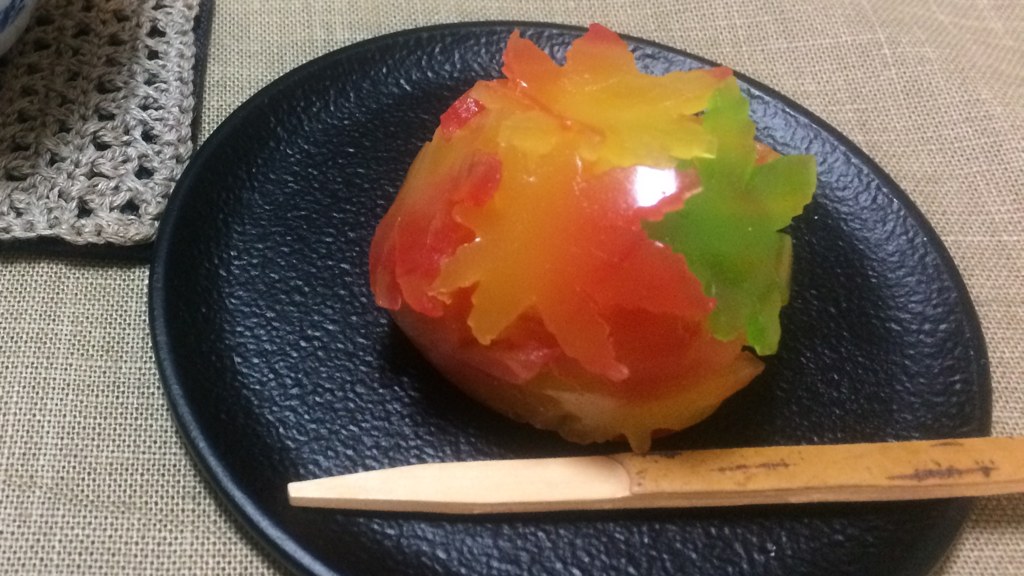 Momijigari cake was created from a scene of the Japanese autumn by a Japanese pastry shop in Kyōto. As I already told you, we, Japanese people, appreciate the change of seasons. We celebrate cherry blossoms during spring, stars in summer, the harvest moon around October 15th and autumn leaves changing from green to yellow, and then red. We call this “Momijigari (紅葉狩り)”, which originally means the hunt for red leaves.

But why the word “hunt”? Because we have to go to the mountain to watch them, as we would do to go hunting. "Momiji (紅葉)" is a kind of Japanese maple tree. It is smaller than the other maple trees and its leaves change colour. We serve tempura of Momiji (fried Momiji) in some shops of the outskirts of Osaka in autumn. We do not have autumn leaves yet this year, however they will arrive soon. It’s impressive to watch them nearby, but also from a distance.

The amount of leaves and stalks should be adapted according to the desired taste: roughly 1½ teaspoons (8-10 grams) of Aracha for 180ml (6oz) of spring water. First infusion should last about 60 seconds in water at 70-80ºC (160-175ºF). The second infusion should be done at more quickly at higher temperature than the first one.